I mean, have you tried picking up even just a single box of ammo at your local gun store or shooting range lately?

If you have, then you know exactly what I’m talking about.

The entire nation is gripped by an ammunition “supply crisis” that’s leaving us all un-armed and
un-trained!

Ammo producers are doing everything they can to keep up with the demand, but even with tripling output (yes, tripling!), they simply can’t pump out enough bullets to properly supply those of us who are looking to stay "ready for action" with our firearm.

What’s caused all this bullet-busting frenzy?

Blame it on the recent “1.6 billion bullet”
ammunition order from the U.S. government…

The government bean-counters “say” it’s to take advantage of lower prices by buying in bulk for departments like Department of Homeland Security and Secret Service.

But some think that since the government can’t disarm its citizens by confiscating weapons, they can at least take away the ammunition that feeds them.

No matter what the truth really is, you can’t argue with the fact that everyone who owns a gun is in a complete frenzy, trying like hell to locate and grab any ammunition we can get our hands on before someone else gets to it.

To make matters worse, it's spawned a bunch of a "ammo-hoarders" who are out there buying up every box they can find... and then just stockpiling them away while the rest of us are left to go on a virtual "scavenger hunt" to find a single bullet.

It's simply not fair!

I've even seen gun store tantrums by customers who drove up to 90 miles one way for a box of ammo... only to find the shelf completely empty by the time they got there!

Things have gotten so bad that even my favorite local gun range has limited us to only two boxes of ammo at a time… and these are only reload shells - NOT factory ammo!

Less Ammo + Skyrocketing Prices Means
It’s Harder Than Ever For You To Train With
Your Firearm To Protect Those You Love!

To make matters worse, thugs, gangbangers, and meth-addicts should be dancing in the streets because the current ammo shortage actually gives the “bad guys” the advantage!

Emergency response staffing has been cut down 48% across the nation (in some places staff was cut up to a whopping 93%!)

Law enforcement firearms training budgets have been hacked to pieces

And now you and I have less ammo to train with thanks to the government’s 1.6 billion bullet “ammo grab”

Meanwhile, the predatory street-criminal is out there right now perfecting their “craft” by using real-world violence against honest and upstanding citizens like you and me.

Bottom line… the bad guys are “training” more than ever – and if you’re not… your ability to defend yourself and your loved ones has never been at a bigger risk than it is right now!

For most people concerned about their safety, that would mean trying harder than ever to carve out the time and money to go to the range more often, right?

Going To The Gun Range Has Simply Become
Too Boring… Too Expensive… Too Time-Consuming… And Frankly NOT Realistic Enough!

Oh sure… going down to the range and punching a 1-inch shot group of holes into the forehead of a paper “bad guy” may make you feel more confident and give you bragging rights with your buddies… but it doesn’t necessarily make you any safer, right?

I mean, when a meth-fueled scumbag breaks into your home to terrorize your family in a home invasion, it’s not the same as you popping off a few caps in the relaxed, static environment of your local gun lane.

You DO realize that, don’t you? I sure hope so, for your sake.

Of course you could sign up for a realistic training course that’s designed to put you “in the action” where you really feel like you’re defending against a vicious, armed attacker.

There are plenty of courses like this out there and I highly encourage you to check them out because they’re very effective, but a word of warning... they’re also very expensive!

Besides the cost of traveling to these highly-sought after training courses… the time away from work… and the inflated prices due to ammo needs during your training, these courses are just too far out of the budget of most gun-owners out there.

But there’s a better alternative to boring target shooting and
high-priced “scenario-based” training schools! In fact let me share with you… 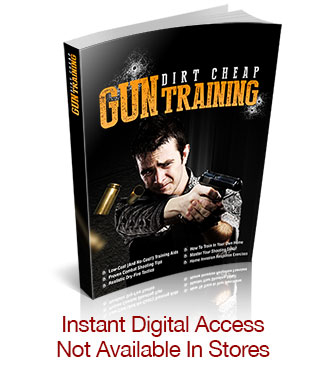 It's called "Dirt Cheap Gun Training" and it's the most comprehensive collection of "quick tip drills" ever published.

Over the past 2 years, we held a series of workshops consisting of representatives of the military… law enforcement… SWAT… top-notch firearms instructors… and even your everyday gun-owner who spent their time researching the best ways to train with a firearm.

In these focus-groups, we asked participants to give us their very best tips, tricks and tactics for how to train with a firearm that would cost little to no money and yet still prepare the average citizen for a real life-or-death encounter in your home, on the street, or in your car.

Even with our own internal team’s combined experience, we were blown away by the creativity and effectiveness of the advice we received… and you will be too because we hand-picked the very best to create the most comprehensive manual of simple yet powerful firearms training tips ever created.

You’ll Be Lightening Fast… Bulls-Eye Accurate…
And Downright Deadlier Than Ever
With These Simple No-Cost And Low-Cost
Gun Training Secrets!

The Dirt Cheap Gun Training manual is not just another "how-to" shooting guide or instructional program on how to fire your weapon.

There are plenty of really great gun courses and books that can teach you about gun handling, sight picture, trigger squeeze, movement, etc.

Instead, we'll show you how to take every single one of your combat shooting skills... and make you 10X deadlier in the shortest time possible using simple, ingenious training exercises developed by military, law enforcement, and expert gun competitors.

Your shooting skills razor-sharp - and ready for action!

Do you want to shoot faster? Check out page ___ to see how to use a simple piece of gym equipment to put more rounds in the bad guy faster than ever before!

Do you want to develop dead-shot accuracy - even under instense stress? The scenario drills we cover in this one-of-a-kind guide will have your heart-thumping like you're in a real "fight for your life" gunfight... without even leaving your home!

Do you want to master "tactical movement" - OVERNIGHT? Then you'll have a blast with our 5 "Roman" training tips where you'll discover the secrets to fine-tuning all of your body's senses of touch and sensitivity.

I promise that your training will be more realistick.... more heart-pumping...
and give you more confidence than ever before!

It's Simple, Cutting-Edge (And CHEAP!)
Gun Training... That Can Save Your Life!

In fact, I'm even going to let you practically "steal" the entire program from me...

Renting a lane at your local gun range will set you back about $15/hour + targets...

But you can get the "Dirt Cheap Gun Training" manual for only $17 (complete!) and discover how to conduct your own cutting-edge training drills (at home!) that work BETTER than your best day at the range!

That's less than the cost of a single box of ammunition!

Plus, to sweeten the pot even more, I'm going to throw in a special offer with 3 bonus training reports...

Plus - If You Order Right Now, I'll Even Throw In These 3 Bonus Reports... Absolutely FREE! 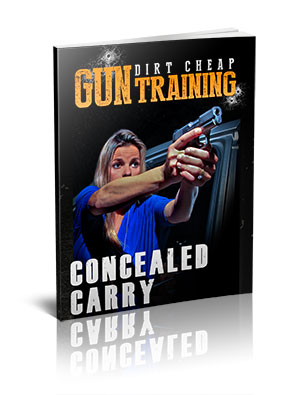 These are the lessons you won't get at your local Concealed Carry Weapons class!

Hand-picked by top-notch CCW instructors as the best exercises to add more realism to your firearm self-protection, these bonus tips, tricks & tactics are just what you need to take your tactical expertise to the next level. 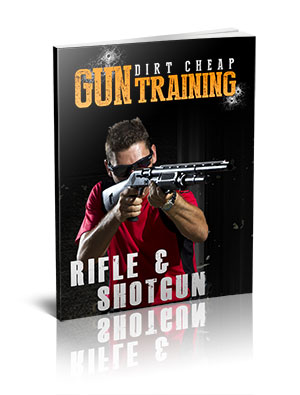 Despite their undeniable stopping power - shotguns and rifles are some of the least trained firearms around, often serving only as an outdoor sporting gun or as a back-up to handguns. Big mistake!

Discover how to conduct the critical moves and skills necessary to unleash the true potential of using a "long-gun" for personal protection in and around your home with simple-yet-powerful tactics like... 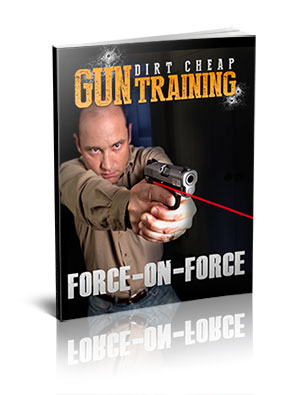 Nothing tests your combat skills better than fighting full-speed against a real life person (or persons)!

Grab a training partner and load up any of the special exercises you'll find in this special Bonus Report to experience the deep down confidence that you'll have what it takes to defend yourself and those you love from a real-life vicious attack if you're ever forced to.

A lot of companies don't like to guarantee their training at all and of course you'd never be able to order from Amazon or other big-chain bookstore and take a book back if you didn't like it, right?

But I'm so confident that you're going to be blown away by all the great training drills we've put together for you that I'm willing to back it up 100% with my iron-clad 365-day money-back guarantee to make this a complete no-brainer for you...

Order "Dirt Cheap Gun Training" now... check out all the training drills and tips for a full 365 days.. and you shoot faster than ever...
see increased accuracy... and feel rock-solid confidence in facing a real life-or-death gunfight.. just contact our Support Team for a fast refund.

No questions asked. No hassles. Your word is gold with us!

That's my bulletproof promise to you... and you can bet on it!

As you can see, I've spared no effort in helping you finally beat the "bullet recession" with this collection of simple-yet-powerful training stategies.

I know you're as frustrated as I am with the ammo shortages and skyrocketing prices which is why I know you're going to truly enjoy training with these amazing tactical exercises.

Go ahead and choose your package below and you'll have instant access to all of the training within minutes.

I look forward to hearing how your training is going!

Please Choose One Of The Packages Below Now...

P.S. Keep your hard-earned money right where it belongs... in your pocket! We'll show you how to get the most realistic gun training ever and do it so cheaply you'll wonder why you ever went to the gun range in the first place. Plus, you risk nothing because you have a full year to give every one of the training tips a try. If you don't find that you're a faster shooter... and deadly accurate, simply contact our Support Team and ask for a fast and courteous refund - no questions asked!